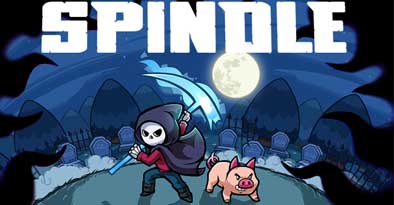 Frankfurt/Germany, July 29th 2021: Who did not think about being the Grim Reaper at least once? With Spindle, players can finally slip into the role of Death himself. But even Death needs a loyal friend which is why a Pig will always be at your side. Together players need to solve an important mystery: Why does nobody die anymore?

Spindle is an old-school zeldaesque action adventure where you fight enemies, solve puzzles and explore dungeons. All set in a beautiful handcrafted pixel world. We could write a lot about the gameplay but why should we? Instead, for the announcement, we made sure a playable demo is ready and made available for everyone.

Interested players can join support the game right now, as the Kickstarter Campaign of Spindle has just started. The three man team is looking for 55,000€ for the campaign to succeed and to make Spindle truly special.