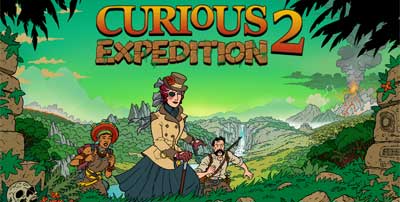 Gothenburg, Sweden – August 11th, 2021 – Thunderful Publishing & independent developer Maschinen-Mensch are thrilled to announce that their charming narrative roguelike adventure, Curious Expedition 2, is available now on the Nintendo Switch™. The game originally launched on PC and received several free content updates, so Switch players can enjoy the whole package while playing at home or on the go. The Nintendo Switch™ retails for $/€19.99 / £16.99.

Curious Expedition 2 is like a Journey to the Centre of the Earth version of D&D, mixed with narrative roguelike elements, all wrapped up in a streamlined and accessible gameplay experience. Take on the role of an intrepid explorer, assemble your crew and head out into the unknown. On your expeditions you’ll come across all manner of cultures, flora, fauna, treasures and more, ranging from the worldly to the altogether more… curious! Using a combination of hand-crafted and procedural gameplay and story elements, Curious Expedition 2 creates completely unique and epic adventures every time you play.

You can fight T-rexes, plunder pirate ghost ships, barter with traders and indigenous tribes, recruit fellow explorers, discover ancient treasures and a whole lot more in your own procedural pulp adventure. In Curious Expedition 2, a world of unimaginable wonder and surprise awaits!

The Switch version includes all the content added after launch, most notably the new Director Mode and weekly Club Competitions that offer more challenges and rewards.

“It was really exciting for us to see Curious Expedition 2 announced and made available during the Nintendo Indie World showcase,” said Riad Djemili, CEO of Maschinen-Mensch. “We think the game is a great fit for the Switch, as you can start your run at home on the big screen and just pick up where you left off on the go. Curious Expedition 2 welcomes all types of adventurers and we can’t wait for more players to explore the colorful world we created.”

About Curious Expedition 2In a reimagined late 19th Century mysterious islands shrouded in purple fog have begun to appear in the oceans, only to vanish soon afterwards. The three great Explorer Clubs of Paris are now funding expeditions to these strange islands in a bid to make bold new discoveries. These new treasures will be exhibited in their stands at the upcoming World’s Fair. Will you seek out the legendary Golden Pyramid, or choose to recover the Rainbow Orchid instead? In Curious Expedition 2, a world of unimaginable wonder and surprise awaits!

Xbox one vs Indie Game