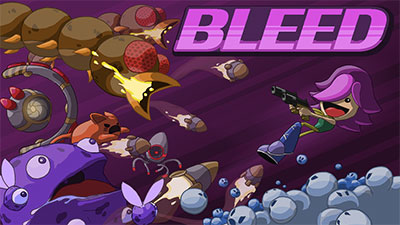 Bleed out next week on Nintendo Switch – become the Greatest Hero of All Time!

7 December, 2017 – Digerati Distribution, in partnership with Bootdisk Revolution and Nephilim Game Studios, is thrilled to announce heroic indie hit Bleed will be air-dashing and bullet-dodging its way to Nintendo Switch™. The hyperactive action-platformer – which features Story, Arcade and Challenge modes available to play solo or in 2-player local co-op – will release in a flurry of pink-haired fury next week, Thursday 14 December.

Originally launched for Xbox 360 as part of the Xbox Live Indie Games service and released shortly afterwards on Steam, Bleed has been a big hit with players and press. The game currently has a 93% positive rating on Steam (out of 1,266 user reviews) and GamesRadar has hailed it as one of the best Xbox Live Indie Games of all time.

Wryn is a girl with a big arsenal and big dreams – she wants to be the ultimate videogame hero! Help her take down the Greatest Heroes of All Time in an action-packed bid to claim the title for herself and show the world what a true hero looks like!

Bleed is an action-platformer focused on stylish, acrobatic dodging and fluid, challenging gameplay. There’s no filler – just you and your skills against seven levels of enemies, obstacles, breakneck set-pieces and inventive bosses!

Key Features
Unique control scheme enabling crazy fast action
7 levels packed with multiple set-pieces and bosses
4 difficulty levels that remix enemy placement and boss patterns
2-player local co-op for all modes
3 unlockable characters with their own gameplay twists
Survive the entire game on one life in Arcade Mode
Select and battle up to three bosses at once in Challenge Mode
Trophies and Achievements added for PS4 and Xbox One versions
Localized in the following languages: English, Spanish, French, Italian, German