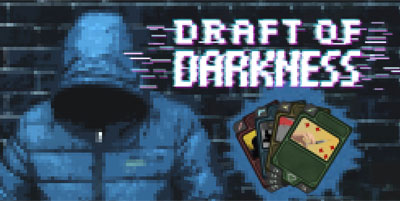 Draw back the light in Draft of Darkness, a survival-horror deck-building game releasing in Early Access on the 30th of July

Solo developer, Crawley Games, is excited to announce their first title, Draft of Darkness, which will be released in Early Access on the 30th of July. Draft of Darkness takes classic survival horror mechanics, merging it with the modern-day strategy of a deck-building Roguelike. Simply put, imagine Slay the Spire and Resident Evil had a gruesome baby!

A card is only as good as its weapon – Attack cards are linked to a weapon, managing your weapons resources as well as your deck is vital to make sure your build is ready to defeat what lurks in the shadows.

Is the darkness better as a group? – Find friends and foes lurking deep within the darkness. Manage the status of your party, avoid radiation and infection at all costs!

Every death brings rewards – At the end of every run, you will receive credits that can be used to open booster packs to unlock new starting cards. Every death is a chance to find new strategies!

Be careful what you ask for – Draft of Darkness has a unique “meta-story progression” system, every decision can alter the outcome of the story and allow for new ways to progress. Different choices are available in each run but be careful, some will have serious consequences.