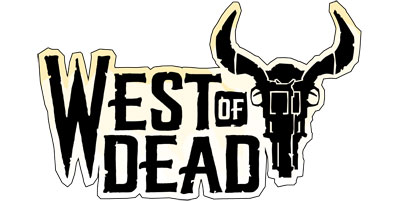 WEST OF DEAD LAUNCHED TODAY ON XBOX ONE & PC!

Brace yourself & steel your soul – get ready to enter purgatory.

“All stories have an end.
For the living, it’s death.
For the dead, it’s moving on – East or West.
As for me? What’s say we start at the beginning… after I died for the first time.”

Who said dying was easy? WEST OF DEAD stars the exceptional voicework of Ron Perlman (Hellboy, Sons of Anarchy) as the main protagonist William Mason. He is a dead man who awakes in purgatory, bound to resurrect with no memory of who he once was. Fight hard to vanquish evil spirits that are hellbent to hunt you down while piecing together the mystery of your own past. Get ready to enter and then re-enter purgatory again. And again. And again.
In a world of light and shadow, ignite lanterns to shatter the darkness and thereby blind your enemies in order to take them down. Count every bullet and act tactical, you need quick reflexes to dodge, slide behind covers, reload and reassess. Find your flow to take down those evil spirits or you won’t survive long in the underworld.WEST OF DEAD, created by Upstream Arcade and published by Raw Fury, has released on Xbox One, Steam, GOG, and Xbox Game Pass today, coming to PlayStation 4 and Nintendo Switch in August 2020.
For more info, enter: https://westofdead.comStep into a dark, underworld maze filled of shadows and danger. The grim cover-based, twin-stick action game with roguelike elements, WEST OF DEAD, has launched today on Xbox One and PC.

In the Western-stylized visuals of the underworld, evil souls linger. Walk bravely into the shadows of a procedurally generated maze that changes every time you enter. The deeper you get into Purgatory, the more challenging the horrors become.