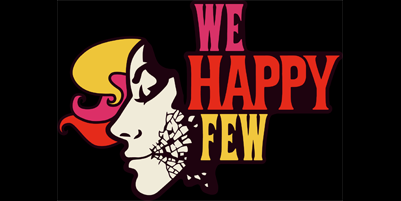 Sex, drugs, and rock ‘n roll – a killer encore for We Happy Few.

In this second piece of handcrafted Season Pass content, you play as Wellington Wells’ most beloved rock star, Nick Lightbearer, in a brand-new story! Heartthrob, artist, and personal trainwreck Nick Lightbearer is adored by legions of fans—until disaster strikes when a Nick-centric fan convention is plagued by a string of murders. When all signs point to him as the killer, how will he reconcile the disturbing overlap between his own blackouts and the killings?

This DLC is part of the We Happy Few Season Pass for $19.99 or individually for $7.99, found on Steam, GOG.com, the Microsoft Store, and the Official PlayStation® Store.