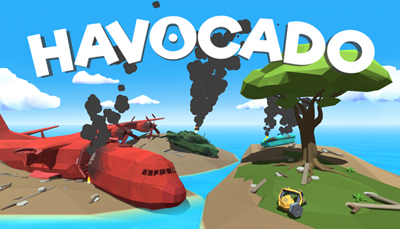 YOU CAN HAVE HAVOCADO ON STEAM EARLY ACCESS, DESPERADO!

While the action skips merrily along, from idyllic island settings to oil platforms, you’ll shoot, punch, drive, and use actual magic to eliminate your fellow floppy players. There are a multitude of diverse locations and awesome vehicles to help you traverse them and weapons (oh, so many weapons!) to help you score a decisive victory for your team.

There are four distinct teams in Havocado: Team Aqua, Team Army, Team Aero and Team Alchemy. Each symbolises the vehicles and combat within the game but doesn’t restrict players to those disciplines. Think of the teams more as your choice of affiliation within Havocado’s ultra-competitive world. Choose wisely though — and stick to your guns (or your boats, planes and potions) — no one wants to havo-cuddle with a flip-flopping floppy person.

Havocado is the debut title for Webble Games, founded by Havocado aficionado Jordi Maxim van den Bussche — otherwise known as YouTuber, Kwebbelkop. Jordi’s aims for Webble Games are clear, games that are as fun to play as they are to watch. In order to achieve those aims, Webble has focussed on community engagement and feedback from the very beginning.

Jordi: “We launched the Webble Games Discord channel in November 2018 and have built a group of 1500+ passionate Havocado players. Community engagement has been a huge part of Havocado’s ongoing development, with regular play-test sessions on Discord — including three big Alpha tests we’ve conducted in recent months.

“Just like the game itself, our Discord members are divided into four factions of Aqua, Aero, Army and Alchemy — and each have actually chosen a ‘president’ for those factions. These guys have helped the development process enormously with frequent feedback and engagement; from gameplay features to design decisions. We’ve even held occasional polls on Discord for collective decision-making on Havocado — including the name itself.

“Now the game is actually out there — and we can’t wait to hear more from those who will be having Havocado!”

Havocado has landed, in a somewhat wobbly fashion, on Steam Early Access today.