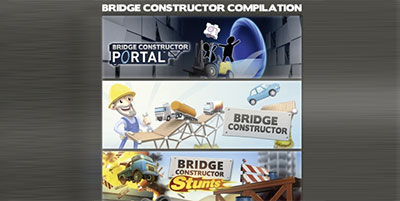 Stuntman and engineer in one? No problem with Bridge Constructor Stunts! Build imposing ramps and loops to reach your goal in the diverse stages. But building structures alone isn’t enough this time: you sit behind the wheel of the vehicles yourself and have to maneuver them skilfully to the goal.

Features:
Improved and simplified Construction Mode
Build ramps and drive vehicles across them yourself
Diverse levels with multiple objectives: reach the goals, collect stars, score target
Delivery vans and dump trucks with cargo that wreaks havoc when coming loose
Various building materials
Spectacular stunts and rampages of destruction
Let the world be part of your most outrageous jumps

Bridge Constructor lets players become an appraised bridge engineer and architect. Creating and designing new constructions and real life testing their stability and functionality is core to the game. Thanks to the laws of physics the game offers inferior creations as well as collapses and sheer chaos! Different materials such as wood, steel cables or concrete pillars offer countless ways to create new bridges. But players need to keep a keen eye on the budget as well.

The Witcher – video beautiful World of The Witcher