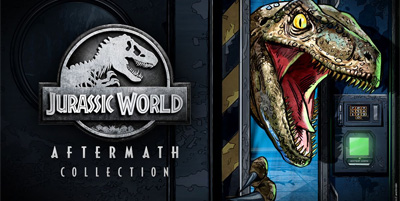 Gateshead, United Kingdom – October 19, 2022 – Coatsink, in collaboration with Universal Games and Digital Platforms, today revealed that the original Oculus Quest VR title, Jurassic World Aftermath Collection, is coming to Nintendo Switch on November 10, 2022. This new reworked version of the popular survival adventure game, built specifically for the Nintendo Switch, will include both Part 1 and Part 2 of Jurassic World Aftermath in one complete package.

Crash-landing on Isla Nublar after the fall of the Jurassic World theme park, players find themselves trapped in an abandoned research facility when their mission to recover valuable information goes disastrously wrong. To survive, they’ll need to explore and solve puzzles, while evading a menagerie of ferocious dinosaurs, including ravenous Pteranodons, cunning Velociraptors, and the terrifying T. rex.

Players will feel the thrill of being hunted by ferocious prehistoric predators that dominate and roam the island. They’ll need to be wary of noise as they use a combination of stealth and distraction to evade jaws all too eager to make humans their next meal. As players carefully explore this atmospheric world rendered in a distinctive art style, they must solve challenging puzzles and find a way to survive.

Featuring a variety of cool locations and dinosaur encounters, Jurassic World Aftermath Collection delivers the wonder and excitement of the Jurassic World franchise at every turn as players venture to the opulent heights of Dr. Henry Wu’s office and delve into a secret vault deep beneath the facility in this thrilling adventure.