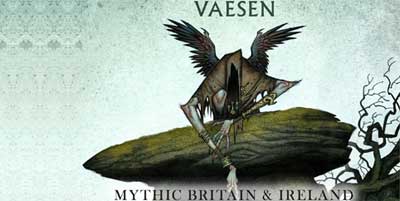 Now, players can explore the fog-shrouded streets of London and discover the strange secrets of Rose House and the British Society. Discover the mysterious islands and walk the eerie moors in search of the long-lost tales and ancient remnants.

This 156-page full-color hardback book is now available in the Free League webshop and at retailers worldwide, in PDF format at DriveThruRPG, and as a VTT module on Foundry and FantasyGrounds.

In Vaesen – Mythic Britain & Ireland, you will find a complete guide to the supernatural British Isles and Ireland including the great city of London, the countryside beyond, and the four nations that occupy the islands: England, Wales, Scotland, and Ireland. Brace yourself for a nerve-wrecking exploration in search of the truth of what lurks in the shadows…

The union, based on conquest and maintained by force when necessary, is fraught with cultural differences and ancient grievances. National and regional differences are further complicated by conflicts between the declining nobility and the rising industrial class, between the wealthy employers and the struggling workers, between the native townsfolk and the new arrivals — and nonetheless between the mortal and supernatural worlds.

In the shadows, something stirs. Strange beings. Twisted creatures, lurking at the edge of vision. Watching. Waiting. Unseen by most, but not by you. You see them for what they really are. Vaesen.

Vaesen – Nordic Horror Roleplaying is based on the work of Swedish illustrator and author Johan Egerkrans, and presents a dark Gothic setting steeped in Nordic folklore and old myths of Scandinavia. The game mechanics use an adapted version of the award-winning Year Zero Engine.