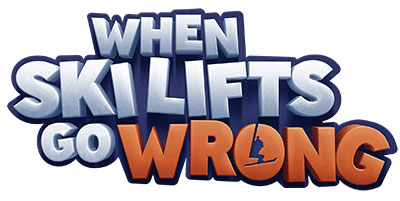 When Ski Lifts Go Wrong is an evolution of the title previously known as ‘Carried Away’. Curve Digital has changed the name in preparation for the full launch early next year, which will see more stages and new vehicles. There’ve been a number of improvements since the successful Early Access began, such as a complete UI overhaul, players having more control over the riders and extra buckets of polygonal blood (look, it’s a square bucket, okay?). Even more features are planned for the final Nintendo Switch™ and PC launch early next year.

Check out the all new trailer showing the ways in which cute, digital skiers will meet their bitterly cold ends in When Ski Lifts Go Wrong.

The game, due to be released commercially on PC and Switch in early 2019, challenges players to build ski lifts to transport eager skiers from one side of the mountain to the other, then wince as the results of their haphazard constructions are revealed in a full 3D simulation where skiers tumble out of chairs and land face first in the snow.

“Many digital concussions were caused in the making of When Ski Lifts Go Wrong… but that’s a small price to pay when developing a game which brings fresh ideas to the classic games that came before it (such as Poly Bridge and Bridge Constructor),” said Jonny Hughes, Producer and Game Designer for Hugecalf Studios. ”We’re always thinking of (and being shown by our playtesters) new ways to maim skiers, snowboarders and other people daft enough to visit our virtual ski resorts. Over two years we perfected our building tools, but it’s funny to think that the addition of blood was an afterthought to this otherwise peaceful construction and puzzle game.”

“We’ve seen the incredible response Hugecalf has received during Early Access and we’re delighted to be building on this for Nintendo Switch,” said Simon Byron, Publishing Director at Curve Digital. “Together with the development team here at Curve, we’ve planned a ton of exciting new updates and content.”

Realistic physics means realistic disasters. This is a game about enjoying each failure, as madcap physics and bloody mishaps make every run feel fresh. You must construct ski-themed courses – rigging chair lifts, gondolas, and ramps – and use direct control to get your skiers and snowmobile drivers to the finish line without them tumbling down a ravine. Or depending on how you feel, purposely send them tumbling down a ravine.

The icy physics builder enjoyed a warm reception on Steam Early Access, managing a ‘Very Positive” rating for its pre-V1.0 reviews. The developers at Hugecalf are now completing the construction, adding the finishing touches, upping the death count, and laying down solid foundations for the final, transformed release in early 2019.

So strap on your skis, grab your tools and bring some bandages because ski lifts are bound to go wrong when this bloody and bloody hilarious construction puzzler releases for Nintendo Switch and Steam in early 2019. Head to Steam now and wishlist When Ski Lifts Go Wrong: https://store.steampowered.com/app/638000/

Worms Battlegrounds in arrivo per PlayStation 4 e Xbox One