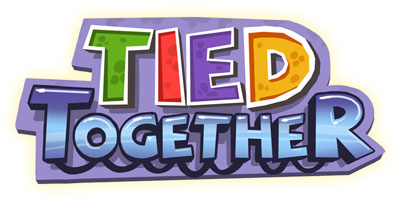 October 19th, Düren, Germany – Today is your chance to become a hero! First, free the Tied Together lab monsters from the Nintendo eShop where they are currently imprisoned. Secondly, gather some friends and find your way out through several dangerous test chambers. As those little monsters are all tied together, the only way to overcome all obstacles and traps is working together as a team.

The game’s developer Napalmtree created a hilarously fun party game which is played cooperatively with two, three or four players. But better warn your neighbors, this game will unleash hours and hours of screaming and yelling! (This was already proven at gamescom as well as some other expos.)

The colorful platformer thrusts players – Tied Together by a tiny chain – into several tricky, experimental set-ups which only scientists could possibly come up with. In these environments, your skills of cooperating efficiently will be tested to the max as you overcome various obstacles, balance passages and deadly surfaces like spikes or lava. Not only will your skills be tested here, but also the strength of your friendship…
In addition, it’s a perfect game for families!

Stick It to The Man disponibile per Nintendo Switch!