Toronto – August 8, 2013 – PC gamers disheartened that they couldn’t enjoy the bone-crushing gameplay and galvanizing art of Guacamelee! can now rejoice as DrinkBox Studios brings the award-winning action-platformer to Steam today. DrinkBox is offering a special Guacamelee! Gold Edition exclusively for Steam users for $14.99, £11.99 and €13.99. To celebrate the launch, Drinkbox is also offering a special 10 percent promotional discount on Guacamelee! and a free Steam code for the critically acclaimed Tales from Space: Mutant Blobs Attack from now until August 15

Features for the Guacamelee! Gold Edition Include:

As an added bonus, DrinkBox has released a brand new trailer showing off Guacamelee! Gold’s features, which is available here:

“We were overwhelmed with the highly positive reception we received after launching Guacamelee! on the PlayStation Network. Since then, we’ve received many requests from Guacamaniacs to bring the game’s intense gameplay and vibrant Mexican-themed setting to other platforms,” said Graham Smith, Co-Founder of DrinkBox Studios. “Steam was always part of the plan for us so we could bring the game to as many gamers as possible, but seeing the response and support from our fans is what really drove us to push forward onto more platforms and we hope the PC guys love it just as much as their PlayStation counterparts.”

Set in and around a small village in Mexico, Guacamelee! is an action-packed, 2D brawler/platformer that alternates between the worlds of the living and the dead. Inspired by Mexican folklore, players take control of a down-on-his luck wrestler named Juan Aguacate, as he fights through hordes of undead enemies and skeleton henchmen to stop the evil Carlos Calaca from gaining ultimate power by sacrificing the beautiful “El Presidente’s Daughter.”

Guacamelee! is also available as a cross-buy game on the PlayStation Network and PlayStation Vita for $14.99. For more information regarding Guacamelee! please visit the website, or DrinkBox Studios’ Facebook and Twitter pages. 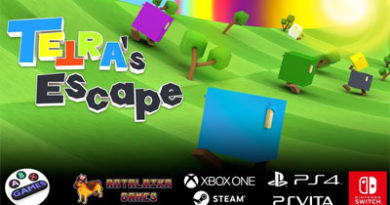